A pair of gold flakes creates a self-assembled resonator

For exploring materials right down to the nano-level, researchers often need to construct a complex structure to house the materials – a time-consuming and complicated process. But imagine if there was a way the structure could simply build itself? That is exactly what researchers from Chalmers University of Technology, Sweden, now present in an article in the journal Nature. Their work opens up new research opportunities.

Investigating nano materials can make it possible to study completely new properties and interactions. To be able to do this, different types of ‘resonators’ are often needed – meaning, in this context, an object inside which light bounces around, much like the way sound bounces inside the body of a guitar. Now, researchers working at the Department of Physics at Chalmers University of Technology, have discovered how a previously known form of resonator, made of two parallel mirrors, can be created and controlled in a much simpler way than previously realised.

“Creating a high quality, stable resonator, such as we have done, is usually complicated and requires many hours in the laboratory. But here, we saw it happen of its own accord, reacting to naturally occurring forces, and requiring no external energy input. You could practically make our resonator in your own kitchen – it is created at room temperature, with ordinary water, and a little salt,” explains research leader Timur Shegai, Associate Professor at the Department of Physics, who was himself surprised by the nature of the discovery in the lab. 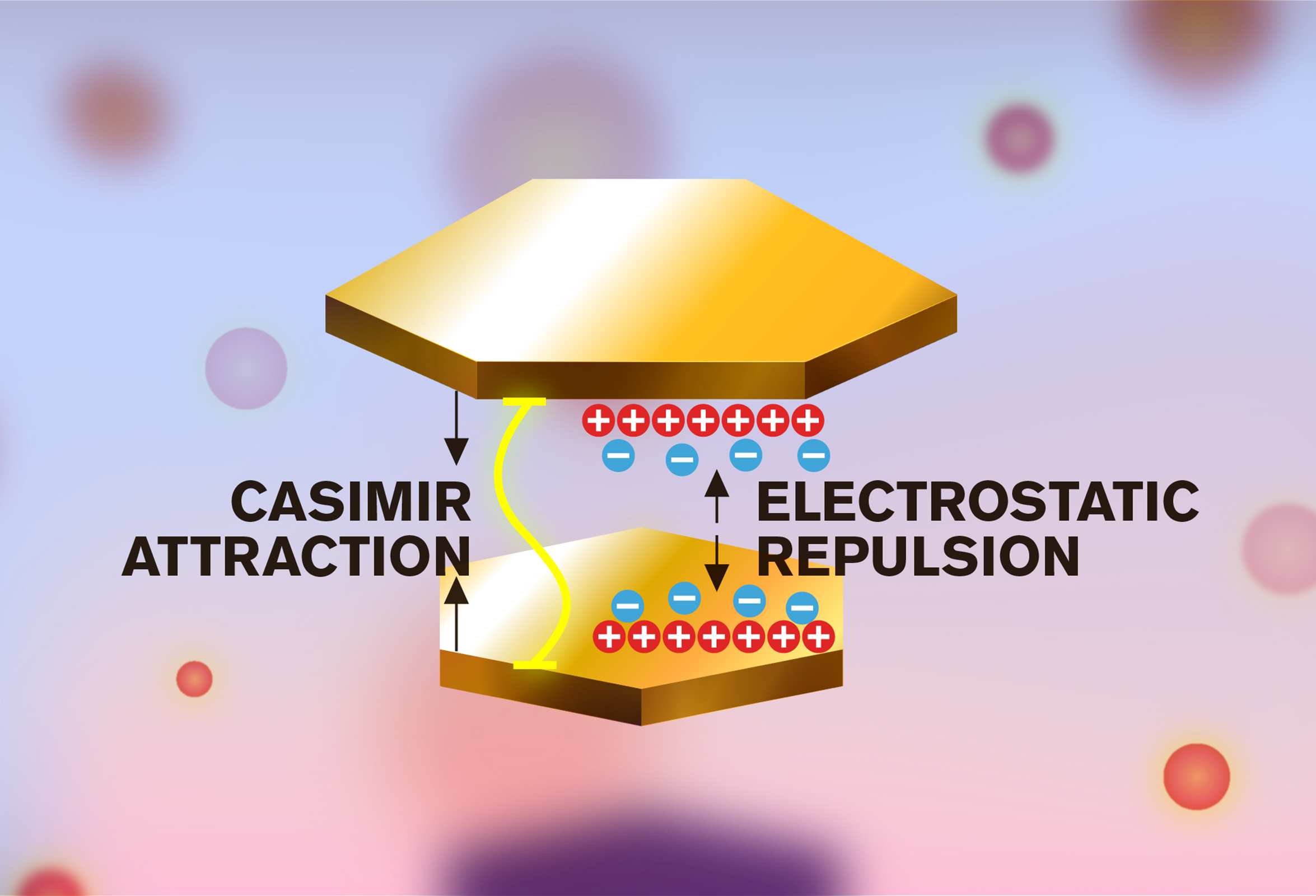 A self-assembling and growing system
What he and his colleagues observed is that when two tiny gold flakes – 5000 nanometres in diameter and only 30 nanometres thick – meet in a salty aqueous solution, an interaction arises that causes them to form a pair. The two gold flakes are both positively charged as the aqueous solution covers them with double layers of ions. This causes a repelling electrostatic force, but, due to the simultaneous influence of something called the ‘Casimir effect’, an attracting force is also created, and a stable balance arises, leaving a distance between the flakes of around 150 nanometres. The two nanoflakes orient themselves facing each other, with a cavity formed between them, and they remain stably in this arrangement, for weeks of observations. The cavity then functions as an optical resonator, a device which provides many opportunities to explore various physical phenomena.

Once the gold flakes have formed a pair, they stay in place, and the researchers also observed that, if not actively separated, more and more pieces of gold seek out each other and form a larger grouping. This means that the structure, purely through naturally occurring forces, can grow and create more interesting opportunities for researchers.

The structure can be further manipulated by adding more salt to the aqueous solution, changing the temperature, or by illuminating it with lasers, which can lead to some fascinating observations.

“What is so interesting in this case is that there are colours which appear inside the resonator. What we’re seeing is basically self-assembled colour. This combines a lot of interesting and fundamental physics, but at the same time it’s very easy to make. Sometimes physics can be so surprising and so beautiful,” says Timur Shegai.

Studying the meeting point between light and matter
The structure can then be used as a chamber for investigating materials and their behaviour. By placing a two-dimensional material, which is only a few atomic layers thick, in the cavity or by making adjustments to the cavity, ‘polaritons’ can also be created – hybrid particles that make it possible to study the meeting point between light and matter.

“Our structure can now be added to the overall toolbox of self-assembly methods. Thanks to its versatility, this could be used to study both basic and applied physics,” says Battulga Munkhbat, Post Doc at the Department of Physics and first author of the article.

According to the study’s authors, there are no obstacles to the structure being scaled up to use larger gold flakes that can be seen with the naked eye, which could open up even more possibilities.

“In the future, I could see this platform being used to study polaritons in a simpler way than is possible today. Another area could be to take advantage of the colours created between the gold flakes, for example in pixels, to create different kinds of RGB values, where each colour could be checked for different combinations. There could also be applications in biosensors, optomechanics, or nanorobotics,” says Timur Shegai.

More about the research

Video from the experiment: The gold flakes create a self-assembled platform.

The researchers behind an energy system that makes it possible to capture solar energy, store it for up to eighteen years and release it when and where it is needed have now taken the system a step further. After previously demonstrating how the energy can be extracted as heat, they have now succeeded in getting […]

E-scooters have become a familiar sight in cities worldwide in recent years, with many new companies renting them for use. But their arrival has also brought new safety concerns. Now, researchers from Chalmers University of Technology, Sweden, present a framework for comparing how different micromobility vehicles, such as e-scooters, and bicycles move in cities, a […]

Mathematical discovery could shed light on secrets of the Universe

How can Einstein’s theory of gravity be unified with quantum mechanics? It is a challenge that could give us deep insights into phenomena such as black holes and the birth of the universe. Now, a new article in Nature Communications, written by researchers from Chalmers University of Technology, Sweden, and MIT, USA, presents results that […]