Modern diapers can absorb and lock in a lot of liquid, meaning they do not have to be changed as often as in the past. But odour is still a problem. In a dissertation by Isabelle Simonsson at the University of Gothenburg, she looked at a specific odour molecule and discovered that in the right setting, it can choose to remain in the liquid and not cause foul odour.

“The odour molecule is called p-cresol and is an organic, volatile hydrocarbon. It’s what causes the strong odour associated with pig farming and horse stables. p-Cresol is also found in human urine and is hydrophobic, which means it avoids water. That’s one of the reasons why it is released from urine into the surrounding air, in other words, that the odour spreads,” says Isabelle Simonsson.

Manufacturers of diapers and other hygiene products have long known that an electrically charged surface can adsorb odour. There is even an old patent covering this, but a great deal has involved conducting tests on different materials and seeing what works. The tests have not resulted in a solution.

The main goal of the dissertation is to investigate what material properties are important for adsorbing odour molecules in urine. One of the materials used was activated carbon, which is found in almost every kitchen fan these days to neutralise odour; it is also an inexpensive and environmentally friendly material.

Tests with carbon materials that had been manipulated in various ways showed that carbon with the least charge was most effective at attracting p-cresol molecules from the liquid, resulting in less odour. Activated carbon, consisting mainly of the carbon variant graphene, was best at capturing the odour molecule.

“Our findings show a direct ‘ion-specific effect’ on the material’s properties and adsorption capability in synthetic urine. Activated carbon has a large surface area, which is good at adsorbing odour molecules,” says Simonsson

Salts in urine enhance the effect

The same effect was not achieved in tests in which p-cresol was dissolved in water, which is due to the salts in urine. The salt ions, including sodium, reduce the water solubility of organic molecules, which then bind to the activated carbon instead.

The dissertation primarily involved fundamental research, but its findings may be useful in many industrial processes, including for the mining industry, water and sewage treatment, the development of new hygiene products, pharmaceuticals and construction materials.

“These results are promising, but there are obstacles to developing an odourless diaper. Like colour. Can you sell a diaper that’s black?”

Link to dissertation: On the Interactions of Ions and Odor Molecules with Nanomaterials in Water and Synthetic Urine

Contact: Isabelle Simonsson, doctoral student in chemistry at the Department of Chemistry and Molecular Biology 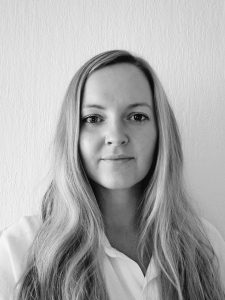