A new study offers the possibility of unmasking genetic mutations in an organ well before commonly-used screening techniques detect signs of cancer. The secret lies in hunting through seemingly healthy tissue for the genetic coding behind tumors, using methods developed at KTH Royal Institute of Technology in Stockholm.

KTH Professor Joakim Lundeberg says the screening of organs was done with spatial transcriptomics, which maps tissue without breaking it up, while diving deep into cells to expose genetic activity within an organ’s wider cell environment.

Publishing today in Nature, Lundeberg and collaborators at the University of Oxford, Karolinska Institutet and Science for Life Laboratory (SciLifeLab) joint research center in Stockholm reported an unprecedented find. Within cross-sections of prostate organs, the genetic alterations in seemingly healthy, unaffected cells surprisingly matched those of the tumor cells.

“This was such a surprise,” Lundeberg says. “You wouldn’t capture this in routine microscopic examinations. We’re seeing things outside of the tumor, and what’s so exciting is that we could get an understanding of the evolution from healthy tissue to tumor establishment.

“It’s possible now that we could actually be able to identify the earliest events in cancer progression. Imagine if we could define these molecular signatures to develop biomarkers to screen and identify patients before a tumor develops.”

Spatial transcriptomics differs sharply from histological sampling, in which a layer of tissue is visually examined under the microscope and scored by a pathologist. “That’s like looking under a lamppost only focusing on the tumor, but not in the surrounding areas, and it is a very subjective type of science,” Lundeberg says.

By contrast, spatial transcriptomics is unbiased, and much more extensive than microscopy, although for widespread use in clinical practice, measurements of genetic alterations need to be crunched down in cost. Lundeberg says that Moore’s Law could begin to take hold as a wider community of oncologists become familiar with the methodology.

One early champion is the study’s own co-author, Alastair Lamb, a urologist who focuses on surgical treatment of prostate cancer patients with the University of Oxford’s Nuffield Department of Surgical Sciences.

“We have never had this level of resolution available before,” Lamb said in a press statement from Oxford. “For example, we have found that many of the copy number events we previously thought to be linked specifically to cancer are actually already present in benign tissue. This has big implications for diagnosis and also potentially for deciding which bits of a cancer need treating.” 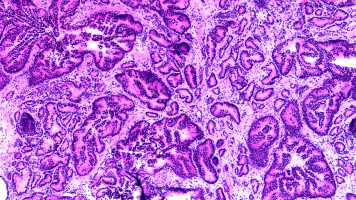