Inflammatory bowel disease is a risk factor for giving birth preterm even when in apparent disease remission, a University of Gothenburg study shows. If corroborated, the results may eventually affect recommendations for women with ulcerative colitis who tries to conceive.

Inflammatory bowel disease (IBD) is chronic inflammatory disease with a prevalence of approximately 0.5 percent. IBD, which includes ulcerative colitis and Crohn’s disease, and – unlike irritable bowel syndrome (IBS) — causes visible damage to the mucous membrane (mucosa) lining the intestines. Characteristic of IBD is its recurrent tendency for symptoms to flare up (relapse), followed periods of low or no disease activity (remission).

Onset of IBD commonly occurs at age 15–30. Questions about its impact on pregnancy and the fetus are therefore common. IBD has previously been linked to negative birth outcomes, such as preterm birth (birth <37 weeks of pregnancy), mainly in women showing signs of active disease.

The present study, published in the journal eClinicalMedicine, shows that microscopic inflammation in IBD, especially ulcerative colitis, is linked to an elevated risk of giving birth prematurely.

Through register linkages, data were also retrieved from several national health registers, such as the Swedish Medical Birth Register and the Swedish Quality Register for Inflammatory Bowel Desiease (SWIBREG).

“Our results suggest that IBD treatment aimed at not merely alleviate symptoms of IBD, but also microscopically heal the intestine, can reduce the risk of giving birth preterm. If our results hold up in future studies, they may therefore be the basis for recommendations to confirm microscopic healing before pregnancy, to reduce such risks,” he says.

“Even a modestly increased relative risk of preterm birth is important, given that preterm birth can greatly affect the child’s health in both the short and the long term. Preterm birth is still one of the most common causes of death for children under the age of five in Sweden,” Karl Mårild concludes. 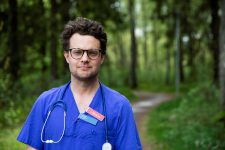