Arctic lakes act as “reactors” or “chimneys” for carbon dioxide

Many lakes are found at high-latitudes in arctic areas. As they receive and process terrestrial organic carbon, these lakes link terrestrial and aquatic carbon cycles, while emitting CO2 to the atmosphere. Yet, their remote location and long winter periods make studying these systems difficult. This period of ice-cover and subsequent ice-melt is of significant importance for understanding CO2 emission from arctic clear water systems, Dirk Verheijen shows in his thesis at Umeå University, Sweden.

Verheijen and his colleagues studied 43 arctic lakes in the Swedish mountain range, from Jämtland to Riksgränsen, tracking carbon processing through internal metabolism and CO2 exchange to the atmosphere for the full open water season. In addition, an experimental study was set up in Umeå, where manipulation of organic carbon input and temperature allowed for investigation of lake functioning under future climatic conditions.

In his thesis, Dirk Verheijen shows that Arctic lakes either decompose organic carbon and produce CO2 in the lake, or directly emit CO2 derived from land, but that these two sources rarely contribute evenly to lake CO2release. Instead, depending on lake structure and landscape properties, one of the sources will dominate over 75 percent of the annual release. Thus, lakes are either mainly a ‘reactor’ processing carbon in the landscape, or mainly a ‘chimney’ releasing landscape CO2 to the atmosphere.

Especially deeper lakes in forested areas, with high organic carbon inputs, were found to have substantial emissions resulting from carbon processing and are thus more likely to function as reactors.

By covering a full year, Verheijen and colleagues were moreover able to address the importance of the different seasons in lake emissions. The period of ice-cover and subsequent ice-melt was found to be of significant importance for understanding CO2 emission from arctic clear-water systems.

On average 55 percent of the total emitted CO2 was lost during ice-melt, with especially clear-water lakes, which are low in organic carbon, having a high proportion (up to 100 percent) of the annually evaded CO2 emitted during ice-melt.

Furthermore, the thesis suggests that a warmer climate may, contrary to expectations, have a dampening effect on organic carbon processing through increased nutrient competition and changes to species composition. As a result, warmer lakes may in fact show decreasing in-lake production of CO2, and may take up rather than release CO2 to the atmosphere.

“In a broader perspective, the thesis contributes to our knowledge of how arctic lakes – one of the most common lake types on earth – relate to regional carbon cycles, and what lake and landscape drivers lead to them acting as ‘chimneys’ or ‘reactors’ in the landscape” says Dirk Verheijen.

The results furthermore stress that omission of ice-melt emission may lead to wrongful classification of the lakes as carbon sinks, while they are in fact emitting CO2on an annual scale.

Future conditions of increased organic carbon input to lakes will further increase the number of ‘reactors’ in the landscape, as well as increasing arctic lake CO2 emissions. In a future warmer and wetter climate, higher inputs of organic carbon are thus predicted to increase the number of ‘reactors’ in the landscape, while decreasing the relative amount of CO2 released at ice-melt. On the other hand, changes in species composition and decreased ice cover can also increase the amount of carbon taken up by the systems, potentially negating effects of DOC inputs on annual CO2 emissions. 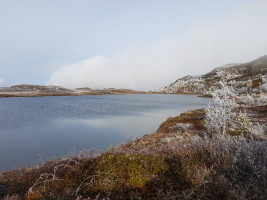