If a ban were introduced on the sale of new petrol and diesel cars, and they were replaced by electric cars, the result would be a great reduction in carbon dioxide emissions. That is the finding of new research from Chalmers University of Technology, Sweden, looking at emissions from the entire life cycle – from manufacture of electric cars and batteries, to electricity used for operation. However, the total effect of a phasing out of fossil-fuelled cars will not be felt until the middle of the century – and how the batteries are manufactured will affect the extent of the benefit.

A rapid and mandatory phasing in of electric cars could cause emissions from Swedish passenger cars’ exhausts to approach zero by 2045. The Swedish government has proposed an outright ban on the sale of new fossil fuel cars from the year 2030 – but that alone will not be enough to achieve Sweden’s climate targets on schedule.

“The lifespan of the cars currently on the roads and those which would be sold before the introduction of such a restriction mean that it would take some time – around 20 years – before the full effect becomes visible,” says Johannes Morfeldt, researcher in Physical Resource Theory at Chalmers University of Technology and lead author of the recently published scientific study.

To have the desired effect, a ban would either need to be introduced earlier, by the year 2025, or, if the ban is not brought in until 2030, then the use of biofuels in petrol and diesel cars needs to increase significantly before then – in accordance with the revised Swedish “reduction obligation”. The combination of these two measures would have the effect of achieving zero emissions from passenger vehicles and keeping to Sweden’s climate targets.

“The results from our study show that rapid electrification of the Swedish car fleet would reduce life cycle emissions, from 14 million tonnes of carbon dioxide in 2020 to between 3 and 5 million tonnes by the year 2045. The end result in 2045 will depend mainly on the extent to which possible emission reductions in the manufacturing industry are realised,” says Johannes Morfeldt.

A transition from petrol and diesel cars to electric cars will mean an increased demand for batteries. Batteries for electric cars are often criticised, not least for the fact that they result in high levels of greenhouse gas emissions during manufacture.

From a climate perspective, it does not matter where the emissions take place, and the risk with decisions taken at a national level for lowering passenger-vehicle emissions is that they could lead to increased emissions elsewhere – a phenomenon sometimes termed ‘carbon leakage’. In this case, the increase in emissions would result from greater demand for batteries, and the risk is thus greater the higher the emissions from battery production.

In that case, the Swedish decision would not have as great an effect on reducing the climate impact as desired. The life-cycle emissions would end up in the upper range – around 5 million tonnes of carbon dioxide instead of around 3 million tonnes. Due to this, there may be reason to regulate emissions in both vehicle and battery production, from a life cycle perspective.

“Within the EU, for example, there is a discussion about setting a common standard for the manufacture of batteries and vehicles – in a similar way as there is a standard that regulates what may be emitted from exhausts,” says Johannes Morfeldt.

But, given Sweden’s low emissions from electricity production, a ban on sales of new fossil-fuel cars would indeed result in a sharp reduction of the total climate impact, regardless of how the manufacturing industry develops.

The results of the study are based on Swedish conditions, but the method used by the researchers can be used to obtain corresponding figures for other countries, based on each country’s car fleet and energy system. The year 2045 is highlighted because that is when greenhouse gas emissions within Sweden should reach net zero according to the climate policy goals of the country.

Exhaust emissions are emissions within Sweden’s borders, which need to reach zero by 2045 to fully contribute to Sweden’s climate policy goals. Emissions from the production of cars and fuels encompass the manufacture of cars and batteries as well as fuel production, including the production of electricity for electric cars. The striped fields show the possibilities for emission reductions in the manufacture of batteries, vehicles and fuels. The diagram assumes a Swedish ban on new sales of petrol and diesel cars in 2030, as well as an increasing usage of biofuels in accordance with the revised Swedish “reduction obligation” until 2030. Illustration: Yen Strandqvist/Chalmers University of Technology 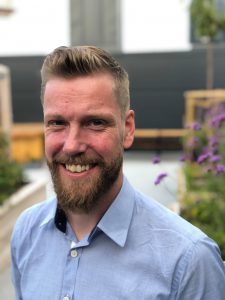 More about the research:

The scientific article “Carbon footprint impacts of banning cars with internal combustion engines” has been published in Transportation Research Part D: Transport and Environment. The research was primarily funded by Mistra Carbon Exit. The study was conducted by Johannes Morfeldt and Daniel Johansson at the Division of Physical Resource Theory at Chalmers University of Technology, together with Simon Davidsson Kurland at the Department of Earth Sciences at Uppsala University, Sweden.

With scientific excellence as a basis, Chalmers promotes knowledge and technical solutions for a sustainable world. Through global commitment and entrepreneurship, we foster an innovative spirit, in close collaboration with wider society. The EU’s biggest research initiative – the Graphene Flagship – is coordinated by Chalmers. We are also leading the development of a Swedish quantum computer.

Biomedicines are produced by living cells and are used to treat cancer and autoimmune diseases among other things. One challenge is that the medicines are very expensive to produce, something that limits global access. Now researchers from Chalmers have invented a material that uses electrical signals to capture and release biomolecules. The new and efficient […]

Major climate benefits when ships “fly” over the surface

Soon, electric passenger ferries skimming above the surface across the seas may become a reality. At Chalmers University of Technology, Sweden, a research team has created a unique method for further developing hydrofoils that can significantly increase the range of electric vessels and reduce the fuel consumption of fossil-powered ships by 80 per cent.   […]