Former athlete Carolina Klüft has been appointed an honorary doctor of medicine at Sahlgrenska Academy, University of Gothenburg. Her work, inspiring people to adopt an active lifestyle, strengthens the Academy’s research focus on preventing ill health through physical activity.

As a champion heptathlete Carolina Klüft, born 1983, is one of the all-time greats. Since moving on from her successful career as an elite track and field athlete in 2012, she has been busy promoting physical activity among youth. She is operations manager of the organization Generation Pep, which aims to give every child and adolescent in Sweden the opportunity and the will to live an active, healthy life.

In addition, Klüft belongs to the steering board of the University of Gothenburg Center for Health and Performance, a collaboration between Sahlgrenska Academy and the Faculty of Education. She has also previously taken part in several seminars with researchers from the Academy.

Diet and joy of movement

According to the Sahlgrenska Academy Board’s citation, Carolina Klüft’s work is well aligned with the research in progress at the Academy on physical activity, lifestyle and promotion of public health.

“With our new appointee as honorary doctor, Sahlgrenska Academy has bonded with a new force to be reckoned with in matters dear to both Carolina Klüft’s heart and our own: preventing ill health by fostering healthy eating habits and exercise. Through her work in Generation Pep, Carolina Klüft inspires organizations and individuals alike. And I know she is always meticulous about the information she presents being supported by scientific evidence.”

Carolina Klüft says she feels honored by the award, and sees clear links between the Academy and the work of Generation Pep — an organization that, she points out, was born from research and science.

“In this area, new knowledge is coming up all the time, and reaching out to people with the facts is essential. They need to be able to share in the knowledge available at Gothenburg and other universities. And then we need to achieve practical change by applying various measures and initiatives in schools and other settings where we work.” 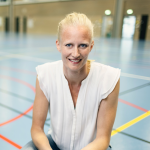