The risk of suicide is clearly elevated in the category of older women with untreated depression who were born outside the Nordic region, compared with corresponding Swedish-born women. This is shown by a study from the University of Gothenburg.

“Our results indicate the need for innovative public health measures to meet needs among older foreign-born adults, especially women,” says Khedidja Hedna, a researcher at AgeCap, the Centre for Ageing and Health at the University of Gothenburg, and lead author of the article now published in European Journal of Public Health.

Despite the high proportion of suicide in the 75+ age group, there has been very little research on the reasons why this is so. Since medication for depression is regarded as an important strategy for suicide prevention, a research team conducted a major national population study to investigate factors related to raised suicide risk among older adults, with and without antidepressant therapy.

The research was done by merging large national population registers to obtain a group of more than 1.4 million inhabitants of Sweden aged 75 and over, who were monitored for up to eight years. During the period, 1,305 people died by suicide: 907 men and 398 women.

Of the women who took their own lives, 164 had untreated depression; and 42 of the total number of female suicides (398) were of women born outside the Nordic region. Suicide risk was elevated among older immigrant women, and the risk was particularly high among those who did not receive medication for depression.

Among women who took antidepressants, the raised suicide risk was associated with high-status employment before retirement. In men, an elevated risk was found in those who were not treated for depression and who had manual jobs.

Another gender difference was the protective effect of being married, which was seen only in men. Raised suicide rates were observed among unmarried men both with and without antidepressant therapy.

The study was led by Margda Waern, Professor of Psychiatry specializing in suicidology at Sahlgrenska Academy, University of Gothenburg.

“Our results highlight the need for outreach services in healthcare, especially for older women born outside the Nordic region, and also for older men, who may also need measures to reduce their social isolation. The study indicates gender differences in factors related to suicide among people aged 75 and over, and these results may be helpful for personalized, gender-specific strategies for suicide prevention in psychiatric care, primary care and the social services,” Waern says.

Title: Sociodemographic and gender determinants of late-life suicide in users and non-users of antidepressants 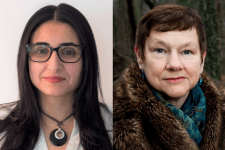 Flickering screens may help children with reading and writing difficulties

Children with reading and writing difficulties who are presented with text on screens with flickering white noise both read better and remember what they have read better, according to a Swedish-Norwegian study. Previous studies have shown that children with attention difficulties and/or ADHD solve cognitive tasks better when they are exposed to auditory white noise. […]

Former athlete Carolina Klüft has been appointed an honorary doctor of medicine at Sahlgrenska Academy, University of Gothenburg. Her work, inspiring people to adopt an active lifestyle, strengthens the Academy’s research focus on preventing ill health through physical activity. As a champion heptathlete Carolina Klüft, born 1983, is one of the all-time greats. Since moving […]

More active efforts to reduce patients’ time on a ventilator in an ICU can both spare their suffering and free up intensive care resources, a thesis at the University of Gothenburg shows. Mechanical ventilation (MV) in an intensive care unit (ICU) is often needed to save a patient’s life. But prolonged stay in ICU also […]

Tree species in Africa’s upland mountain rainforests can adapt both photosynthesis and leaf metabolism to warming. But the ability to do so varies from species to species, according to studies from a new doctoral dissertation. The vitality and composition of tomorrow’s tropical forests depend on how trees can adapt their internal physiological processes to an […]