A research team from University of Oregon, Uppsala University, University of Iceland, and Deutsches GeoForschungsZentrum (GFZ) took this exceptional opportunity to collect lava samples every few days in order to construct a time-integrated catalogue of samples and to monitor the geochemical evolution throughout the eruption to a degree of detail rarely achieved before. Usually, when volcano scientists look at past eruptions they work with a limited view of the erupted materials – for example older lava flows can get wholly or partially buried by newer ones. However, at Fagradalsfjall, the eruption was so well monitored and sampled that scientists had a chance to capture the evolution of an Icelandic eruption in near real-time.

The team were interested in oxygen isotopes. Why? Because oxygen makes up about 50% of all volcanic rocks and its isotope ratios are very sensitive tracers of mantle and crustal materials. In this way, oxygen isotopes can help scientists to determine if magma is mantle-derived or if it interacted with crustal materials as it made its way to the surface. However, in addition to oxygen, the other vast suite of elements making up the volcanic rocks threw up some surprises. For instance, the team observed that this single eruption contains roughly half of the entire diversity of mantle-derived magmas previously recorded for the whole of Iceland.

In brief, geochemical results show that the latest Iceland eruption was supplied by magmas derived from multiple sources in the Earth’s mantle, each with its own distinctive elemental characteristics. To the amazement of scientists, each of these domains had identical oxygen isotope ratios. This result was remarkable and has never been observed before at an active eruption. The study provides new and compelling evidence for distinct mantle-sourced magmas having uniform oxygen isotope ratios, which can help us to better understand mantle dynamics and refine mantle models for Iceland. 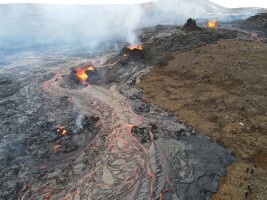 An international team led by Uppsala University researchers has uncovered that eukaryotes (organisms with a cellular nucleus) have made hundreds of big leaps from sea to soil and freshwater habitats, and vice versa, during their evolution. The results, published in Nature Ecology and Evolution, also provide insights into what the habitats of our ancient microbial ancestors looked like.

Loss of the Y chromosome in blood cells of men is associated with disease and mortality, but no clear causal relationship has previously been identified. Now, researchers from Uppsala University show in the journal Science that loss of the Y chromosome in white blood cells causes development of fibrosis in the heart, impaired heart function and death from cardiovascular diseases in men.

In a study an international team of researchers have identified 28 gene regions that have been particularly important in the evolution of Darwin’s finches. These genetic variants do not represent recent mutations but constitute ancestral genetic variation that has accumulated over time as different species of Darwin’s finches have evolved with striking differences in beak morphology.

Oral contraceptives and hormone therapy increase the risk of stroke

﻿Oral contraceptives and hormone therapy at menopause increase the risk of stroke. The increased risk is greatest during the first year of treatment and then declines. The study, which is now published in Stroke, is based on data from over a quarter of a million women from the UK Biobank database.