Look into the camera during video meetings

Göteborgs universitet 3 February, 2022 Media and IT 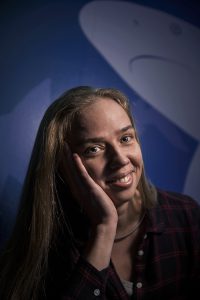 “Having previously focused on what causes Zoom fatigue, we wanted to investigate the more positive aspects of video meetings,” explains Géraldine Fauville, Assistant Professor in Education at the University of Gothenburg. “We wondered what participants can do to come across in a more positive light.”

The team of researchers from the University of Gothenburg and Stanford University set out to answer the question: What role do body language and video conference setting play in the impression we make on other people?

Grading people’s perceptions of others
The team produced 288 screenshots of people exhibiting different body language. The images showed people looking in various directions (into the camera, at the other meeting participants or to the side), sitting closer or farther away from their computer and with different camera angles.

The study participants were then shown a selection of these images and were asked to grade the extent to which they perceived the people as sociable, sympathetic, trustworthy and threatening, for example. Approximately 4,000 people from around the world took part in the study, which was conducted online.

“In order to be judged as more positive, sympathetic and present in the discussion, you should look directly into the camera – not at the other participants’ faces on the screen or away from the computer,” continues Géraldine. “The camera should also be positioned higher than eye level to create a high camera angle.”

However, the distance from the camera was not important in terms of how participants perceive other people during video meetings.

Read more about the teams earlier research on Zoom here.

Facts:
The article “Impression Formation From Video Conference Screenshots: The Role of Gaze, Camera Distance, and Angle” is published in Technology, Mind, and Behaviour.