Artificial intelligence could be one of the keys for limiting the spread of infection in future pandemics. In a new study, researchers at the University of Gothenburg have investigated how machine learning can be used to find effective testing methods during epidemic outbreaks, thereby helping to better control the outbreaks.

In the study, the researchers developed a method to improve testing strategies during epidemic outbreaks and with relatively limited information be able to predict which individuals offer the best potential for testing.

“This can be a first step towards society gaining better control of future major outbreaks and reduce the need to shutdown society,” says Laura Natali, a doctoral student in physics at the University of Gothenburg and the lead author of the published study.

Simulation shows rapid control over the outbreak
Machine learning is a type of artificial intelligence and can be described as a mathematical model where computers are trained to learn to see connections and solve problems using different data sets. The researchers used machine learning in a simulation of an epidemic outbreak, where information about the first confirmed cases was used to estimate infections in the rest of the population. Data about the infected individual’s network of contacts and other information was used: who they have been in close contact with, where and for how long.

“In the study, the outbreak can quickly be brought under control when the method is used, while random testing leads to uncontrolled spread of the outbreak with many more infected individuals. Under real world conditions, information can be added, such as demographic data, age and health-related conditions, which can improve the method’s effectiveness even more. The same method can also be used to prevent reinfections in the population if immunity after the disease is only temporary.”

More exact localization of the infection
She emphasises that the study is a simulation and that testing with real data is needed to improve the method even more. At the same time, she sees the research as a first step in being able to implement more targeted initiatives to reduce the spread of infection, since the machine learning-based testing strategy automatically adapts to the specific characteristics of the disease. As an example, she mentions the potential to easily predict if a specific age group should be tested or if a limited geographic area is a risk zone, such as a school, a community or a specific neighbourhood.

“When a large outbreak has begun, it is important to quickly and effectively identify infectious individuals. In random testing, there is a significant risk failing to achieve this, but with a more goal-oriented testing strategy we can find more infected individuals and thereby also gain the necessary information to decrease the spread of infection. We show that machine learning can be used to develop this type of testing strategy,” she says.

More effective use of testing resources
There are few previous studies that have examined how machine learning can be used in cases of pandemics, particularly with a clear focus on finding the best testing strategies.

“We show that it is possible to use relatively simple and limited information to make predictions of who would be most beneficial to test. This allows better use of available testing resources.”

How the method was developed
To develop the method, the researchers used the SIR model to simulate an epidemic outbreak. The model divides the population into three groups: susceptible, infectious and recovered.

Illustration: Illustration of a simulated outbreak, with and without the method for strategic testing (Laura Natali)

Explanation of the illustration:
The images show a simulated outbreak at the same point in time, with and without the researchers’ method. The left map shows the status when not using the method and when the community is not shut down. It is dominated by orange (infectious) and black (previously infected and now immune or deceased). The right map shows the status at the same point in time but where the researchers’ method has been used. The map is dominated by grey (not infectious but susceptible) and blue which indicates shutdown areas that were able to be identified thanks to the method. These areas no longer have any infectious individuals who can drive the epidemic forward. 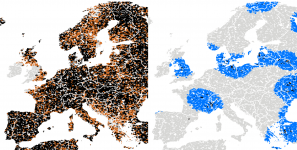