New findings on the field of perinatal brain injury

A new study, led by researchers at the University of Gothenburg, have generated the first comprehensive transcriptional atlas of neonatal mouse meningeal leukocytes, under normal conditions and after perinatal brain injury. The study highlights the importance of meninges for brain development and pathology.

The brain is one of the most complex organs, and it controls essential functions in our day-to-day lives. Therefore, any harm or injury to the brain can have lasting effects, and can even be fatal. The infant’s brain is even more susceptible than adult brains, and this is especially the case for preterm infants given the fact that their brains are still under development.

The meninges surround the brain and spinal cord of the central nervous system (CNS) to protect neuronal cells from the changeable milieu of the bloodstream by controlling the movements of molecules and cells between the blood and the CNS. These barriers also ensure that the CNS can be kept under surveillance by certain immune cells while at the same time restricting the access of blood-derived immune cells and molecules to specific compartments at the border of the CNS.

In the new study, published in Genes & Development, the researchers used experimental model and provided a detailed immune landscape of meningeal tissue at early stages of development under both physiological and pathological conditions.

Xiaoyang Wang, Professor at the Department of Obstetrics and Gynecology at Sahlgrenska Academy, University of Gothenburg: “We showed that the neonatal meninges contain almost all known types of immune cells, along with novel immune cell subtypes in the developing meninges that we have characterized for the first time.”

Described for the first time

Together with first author Aura Zelco, a researcher in the same group, Xiaoyang Wang and the other authors, discovered that among the seven main immune cell populations in the neonatal meninges, two immune cell subtypes – named border-associated macrophages and the newly defined meningeal microglia-like cells – might be involved in brain development, a function described for the first time for these meningeal immune cells.

Furthermore, they characterized the potential biological function of all the immune cell populations found in the neonatal meninges through further analysis of gene expression and other characteristics of the individual immune cell types.

According the authors, the strongest point of the study is that they also examined the pathological early immune cell response in neonatal meninges. They demonstrated that meningeal immune cells in mice participate in the early immune response that not only occurs in adult animals, but also at very young ages that are equivalent to human preterm infants. For the first time this is suggested as a possible new mechanism for the immune response by one of the earliest inflammatory responders in the neonatal meninges, called neutrophils, after insult to the preterm brain.

To obtain these results, an in vivo mouse model of hypoxic-ischemic brain injury was used, which mimics the lack of oxygen to the brain at birth in human new-borns. To investigate the biological functions and changes of each type of immune cell after hypoxic-ischemic insult, single cell RNA-sequencing was performed, a recently developed technique that allows studying the potential biological function of each type of cell one at a time.

Dr. Aura Zelco explains: “Using this approach, we are able to reveal the potential biological functions of the immune cells and to identify the pathways involved in the changes among different conditions and subtypes. One of the main advantages of this technique is that the data we generated are publicly available and therefore provide a valuable resource for the possible integration and comparison of all data from different age groups. This will facilitate the further understanding of this important brain-border barrier tissue at different developmental stages and under different pathological conditions and will greatly facilitate our understanding of brain function.”

Together with other recent papers that have studied meningeal immune cells at other developmental ages, the current work highlights the importance of the meninges for brain development and pathology and may open up new avenues for revealing the very complicated brain function.

Understanding the precise role of these meningeal immune cells, the signals that control them, and how they contribute to brain injury will therefore open up entirely new avenues for the design of treatments for neurological diseases at different developmental ages.

“The finding opens a new avenue and offers a critical framework for us to better understand the interaction between brain and peripheral immune system for children even at very young age. To further study how the meningeal immune cells contribute to early brain development and disease pathology, will provide exciting new possibilities for identifying attractive therapeutic targets for brain disease in children”, Xiaoyang Wang concludes. 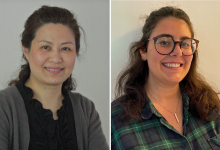 Pregnancy overshadowed by the pandemic

A pregnancy constantly overshadowed by the unknown. That is how women in Sweden who have been pregnant during the pandemic describe it. A study lead by researchers from University of Gothenburg highlights the insecurity and loneliness they have been experiencing. The study, published in the scientific journal Women and Birth, is based on in-depth interviews […]

Workplace infection risk and failing crisis information dissemination are both factors contributing to high incidence of COVID-19 among foreign-born workers in low-status occupations, a report from the University of Gothenburg’s Unit of Occupational and Environmental Medicine shows. Prevalence of COVID-19 is not only high among employees in the health and social care sectors. Overrepresentation is […]

People with obesity were overrepresented among adults in Sweden receiving intensive care for COVID-19 during the first wave of the pandemic. Just over 39 percent had obesity, compared with some 16 percent in the population. The risks of prolonged hospitalization and death in intensive care units (ICUs) was also higher for patients with obesity, as […]

A new study from the University of Gothenburg opens the way for more effective microscopy, making it easier to research diseases. The study shows how artificial intelligence can be used to develop faster, cheaper and more reliable information about cells, while also eliminating the disadvantages from using chemicals in the process. Studying cells and their […]