New peak for corona in wastewater: See the trend

In Gothenburg, concentrations of coronavirus in wastewater have risen further in a week. Now, for the first time, the University of Gothenburg scientists have released a trend chart for the whole pandemic.

The research group headed by Heléne Norder, adjunct professor of microbiology at Sahlgrenska Academy, University of Gothenburg, have chosen this week to make an exception and present the nearly two-year trend of SAR-CoV-2 in wastewater, in the city and its outskirts, in chart form.

As the chart shows, there has been a further rise in the past week. The new record measurement is based on samples taken between 10 and 16 January. Above all, it illustrates clearly how high the current peak is compared with those in the previous — first, second, and third — pandemic waves.

“It’s hard to understand the situation when we say the figures are ‘x’ or ‘y’ times higher than before, but the trend shows clearly how they’ve risen and how widespread the infection is today. We need to show how dire the situation is right now, so that maybe those who aren’t infected can grasp the seriousness of the situation and, now and again, put a face covering on,” Norder says.

These surveys of SARS-CoV-2 in wastewater have been underway since February 2020. They are done in collaboration with municipally owned Gryaab, which carries out wastewater treatment in Gothenburg and the surrounding municipalities. The company sends one sample a week, containing samples collected daily, to Heléne Norder’s research group.

The group reports its results continuously to care providers and the Infection Control Unit in Region Västra Götaland. To a varying degree, the increased concentrations of coronavirus in the wastewater, and the corresponding rise in the prevalence of COVID-19 in the community, have made it possible to predict peak loads in health care during the pandemic.

Heléne Norder emphasizes that measuring and analyzing wastewater becomes even more important if the level of testing for COVID-19 changes owing to variation in the supply of tests and lab capacity, or for other reasons.

“Now that we’re about to reduce the testing, it’s in the wastewater that we see whether infection and its spread are going up or down in the Gothenburg area,” she points out.

As for variants of the virus, omicron remains overwhelmingly predominant. However, the latest survey shows that the delta variant is persisting, at approximately 1 percent. This proportion nonetheless reflects virus concentrations and not necessarily the proportion of people infected.

Diagram: The line shows the trends of SARS-CoV-2 concentrations during the pandemic since February 2020. Week numbers are given on the x-axis (horizontal scale). Source: Heléne Norder, University of Gothenburg.

The diagram and image may be used in editorial publishing. 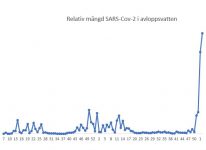 Researchers have developed a potential super wheat for salty soils

Researchers at the University of Gothenburg have developed several new varieties of wheat that tolerate soils with higher salt concentrations. After having mutated a wheat variety from Bangladesh, they now have a wheat with seeds that weigh three times more and that germinate almost twice as often as the original variety.

Top five reasons why midwives stay in the job

Five factors are cited as crucial for midwives’ job satisfaction. They include possibilities for development, role conflict resolution, and burnout avoidance, as a University of Gothenburg study shows. The study is published in BMC Health Services Research. The first author is Malin Hansson, midwife and Ph.D., of the Institute of Health and Care Sciences at […]

Men who had a high body mass index (BMI) as children are at an elevated risk of obesity-related cancer later in life, even if their weight was normal in young adulthood, according to a new study from University of Gothenburg. Obesity-related cancers include a significant group of tumor diseases, many of which are on the […]

When the winters get warmer in northern Sweden, there is a risk for groundwater level decline, despite heavy precipitation. The villain in this story is lingering ground frost that prevents snow meltwater and rain from filling underground reservoirs. This is the finding of a new thesis from the University of Gothenburg.