Led by KTH Royal Institute of Technology in Stockholm, the research team from University of Oxford, Israel’s Interdisciplinary Center (IDC), Herzliya, and University College London (UCL), published design principles to ensure PCAs would benefit all nations in terms of economic growth, job creation, better education and protection of human rights, among other areas, in accordance with the United Nation’s Sustainable Development Goals.

Publishing in Nature Sustainability (“Personal carbon allowances revisited” DOI: 10.1038/s41893-021-00756-w) on the heels of the IPCC’s sobering recent report, the researchers found that changes in behavior due to the COVID-19 crisis, combined with increased digitalization and advancements in ICT and artificial intelligence, offer a perfect storm of opportunity to reconsider an idea that had once been rejected as being “ahead of its time”, as the UK government put it.

“People are watching helplessly while wildfires, floods and the pandemic wreak havoc on society, yet they are not empowered to shift the course of events,” says lead author Francesco Fuso Nerini, Associate Professor at KTH and director of the university’s Climate Action Centre. “Personal climate allowances would apply a market-based approach, providing personal incentives and options that link their actions with global carbon reduction goals.”

Co-author Yael Parag, energy policy professor at the IDC in Israel, says the scientist’ underlying purpose with the paper is to help enable shared responsibility, at all levels of society, since the threat of global warming is universal. “It is not about shifting the mitigation responsibility from governments and big industries to individuals. It is about adding individuals to the effort,” Parag says.

And PCAs provide individuals with clear framework for contributing effectively, says co-author Paul Ekins, resources and environment policy professor at UCL. “People are desperate to do something … but too often they get trivial advice, such as pre-rinsing dishes before putting them in the dishwasher,” Ekins says. “A personal carbon allowance system would tell them what they could do to make a real difference, in a context where they knew other people would also be making their contribution.

“Look no further for a radical, effective suggestion for how individuals can make their lifestyles more climate-friendly.”

Co-author Tina Fawcett, Acting Leader of the Energy Programme, Environmental Change Institute, University of Oxford, says the PCAs embody fairness and transparency, offering people meaningful choices. “It doesn’t take away the need for some difficult decisions, but it does ensure these add up to effective society-wide action to reduce our climate risk,” she says.

Once assumed to be too costly and unworkable, PCAs could now be implemented with less difficulty, thanks to advances in ICT and AI. However, the researchers state that PCAs must be designed in a way that will not negatively impact poor and vulnerable populations, and should consider how its components align with the UN Sustainable Development Goals to eliminate poverty and reduce inequality, among others.

Fuso Nerini says that implementing PCAs would require courageous ´first mover´ countries. “There are clear political risks in advocating challenging or radical policies, particularly if they have never been implemented elsewhere and there is no previous policy experience to learn from,” he says.

“At the same time, those ´first movers´ may experience benefits that go well-beyond reducing emissions and achieving net-zero targets.”

Among these benefits could be to help enable a sustainable recovery from the COVID-19 crisis. PCAs would favor the adoption of low-carbon lifestyles, and thus benefit low-carbon infrastructure and innovation.

This direction would open up room for new businesses and technologies to support decreasing personal emissions, Fuso Nerini says. For instance, new tech companies could capitalize on carbon credit trading between individuals, connecting those with more carbon allowances than they need with those in need of allowances. 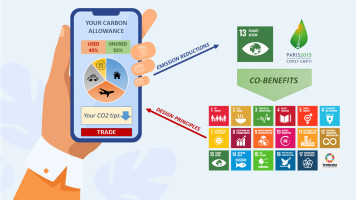 A new biocompatible polymer-based composite material could soon replace metal plates in treating difficult and unstable fractures. Developed at KTH Royal Institute of Technology in Stockholm, the newly-developed material is as strong as dental composites yet non-toxic.

A scanning technology aimed at detecting small amounts of nuclear materials was unveiled by scientists in Sweden today, with the hope of preventing acts of nuclear terrorism.

Bo Cederwall, a professor of physics at KTH Royal Institute of Technology, says the technology can be used in airports and seaports for routine inspection of passengers and goods.

Robots can be more aware of human co-workers, with system that provides context

A new context-aware robotics system can recognize human co-workers and their body shapes, and even predict their movements. KTH researchers found that it operates more efficiently than existing collaborative robots.