Six years ago, there was a marked rise in respiratory diseases among Reykjavik residents during one of Iceland’s biggest volcanic eruptions on record, according to new research findings, to which University of Gothenburg scientists contributed. The adverse health effects increased most when the sulfur dioxide emissions returned in the form of sulfate aerosol deposition.

The present research is based on air quality data and health care records in Reykjavik during the major flood lava eruption of 2014–15 in the Icelandic lava field Holuhraun, from a fissure near the Barbarbunga (Bárðarbunga) volcano. The eruption spread 11 million tons of sulfur oxide over a massive area.

The eruption lasted for six months, during which Reykjavik residents were repeatedly exposed to sulfur dioxide (SO2) emissions, in the form of both gas and, subsequently, deposition of airborne particles known as sulfate aerosols.

Hanne Krage Carlsen, researcher in occupational and environmental medicine at Sahlgrenska Academy, University of Gothenburg, is among those primarily responsible for the current scientific publication, in the journal Nature Communications, on health effects in Reykjavik following the volcanic eruption.

“This is the first time health effects in a large population after a huge volcanic eruption have been studied. We see that high levels of sulfur dioxide, above all, boosted primary care and asthma medication needs, and that there was a further increase in respiratory diseases when the gas cloud matured above the Atlantic and then returned, depositing particles,” says Krage Carlsen, who held a postdoctoral research position at the University of Iceland when the study began.

The study shows that exposure to the fine particles from the mature volcanic cloud led to a total of 11 percent more residents in Reykjavik contacting the primary-care services to seek help for respiratory problems. The largest increase was seen among older inhabitants, whose primary-care contacts rose by 28 percent. In terms of prescriptions for asthma medicine, the biggest increase was observed among children and adolescents: these drugs were prescribed for 25 percent more residents under the age of 18. Among adults and older people, there was a 13 percent increase in such prescriptions.

During the eruption, gas clouds containing sulfur dioxide formed, and intermittently reached Reykjavik, 250 km from the eruption site. The plume drifted across the North Atlantic toward Europe and when the gas clouds returned their contents had, through a chemical process, matured from gas to aerosols (fine airborne particles). The process has been described by volcanologist Dr. Evgenia Ilyinskaya, a researcher at the University of Leeds and co-author of the present publication in Nature Communications.

“Our research shows that during prolonged eruptions such as the one at Holuhraun, both young and mature volcanic clouds can circulate simultaneously, which exacerbates the harmful health effects on inhabitants of volcanic regions,” Ilyinskaya says.

The aerosols found in mature volcanic plumes are thought to be capable of penetrating and damaging the lungs, and causing asthma attacks, for example. The chemical maturation process in the Icelandic volcanic plume meant that the concentration of SO2 was reduced. Since its level was below the threshold value considered harmful, no warnings were issued to Reykjavik’s residents.

The present study in Nature Communications highlights the need for decision-making authorities to be prepared to inform the population, in the days immediately following volcanic eruptions, about the risk of health problems in connection with returning emissions. 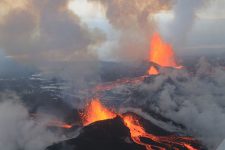 A new model that applies artificial intelligence to carbohydrates improves the understanding of the infection process and could help predict which viruses are likely to spread from animals to humans. This is reported in a recent study led by researchers at the University of Gothenburg. Carbohydrates participate in nearly all biological processes – yet they […]

Many prolonged sick leaves for COVID-19

Nearly 12,000 people in Sweden received sickness benefit from the Swedish Social Insurance Agency for COVID-19 during the first wave of the pandemic. The median duration of sick leave in this group was 35 days, but for many it was considerably more long-drawn-out, according to a University of Gothenburg study. A research group in rehabilitation […]

Flickering screens may help children with reading and writing difficulties

Children with reading and writing difficulties who are presented with text on screens with flickering white noise both read better and remember what they have read better, according to a Swedish-Norwegian study. Previous studies have shown that children with attention difficulties and/or ADHD solve cognitive tasks better when they are exposed to auditory white noise. […]

Former athlete Carolina Klüft has been appointed an honorary doctor of medicine at Sahlgrenska Academy, University of Gothenburg. Her work, inspiring people to adopt an active lifestyle, strengthens the Academy’s research focus on preventing ill health through physical activity. As a champion heptathlete Carolina Klüft, born 1983, is one of the all-time greats. Since moving […]