The current nuclear threat is the most serious since the end of the Cold War. How did we get here and what role can the new Alva Myrdal Centre for Nuclear Disarmament play? On 19 October, Uppsala University will inaugurate this highly relevant centre. Speakers at the inauguration include Beatrice Fihn, Executive Director of the International Campaign to Abolish Nuclear Weapons (ICAN), recipient of the Nobel Peace Prize in 2017, and Rupal N. Mehta, Associate Professor of Political Science at the University of Nebraska-Lincoln, USA. UN Under-Secretary-General and High Representative for Disarmament Affairs Izumi Nakamitsu will speak at the inauguration remotely.

The Alva Myrdal Centre for Nuclear Disarmament (AMC) was established at Uppsala University in 2021, with a national mandate to collect global knowledge on disarmament issues. AMC will provide education, research and policy support on disarmament, collaborate with international researchers, educate disarmament experts for coming generations and help to inform the public about disarmament issues.

Journalists are cordially invited to the inauguration on Wednesday 19 October. The doors to the Grand Auditorium will open at 14:15 and the ceremony will begin at 15:00. Venue: University Main Building, Biskopsgatan 3, Uppsala.Registration is required. Send an email to press@uu.se and tell us how many of you will be coming and if you would like to interview anyone in particular. Please contact us by Monday 17 October.

Beatrice Fihn, Executive Director of the International Campaign to Abolish Nuclear Weapons (ICAN), recipient of the Nobel Prize for Peace in 2017

Ann-Sofie Nilsson, Head of the Department for Disarmament and Non-Proliferation, Ministry for Foreign Affairs, Sweden

Cecilia Wikström, Chair of the Governing Board, Alva Myrdal Centre

The inauguration is also the opening ceremony for AMC’s first annual conference. You will find the complete programme for the conference (19–22 October) here: https://www.uu.se/alvamyrdalcentre/Annual+Conference 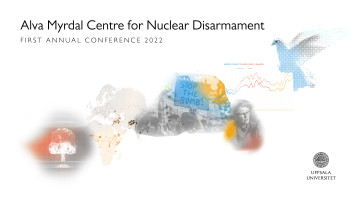 ﻿The earlier infants begin to taste small samples of solid food, the earlier they eat more food and stop breastfeeding. This is shown in a new study from Uppsala University and Sophiahemmet University, in which the mothers of 1,251 infants from all over Sweden participated. Almost half of the infants received tastings at the age of four months.

Bacterial perseverance is a new phenomenon that helps explain how bacteria adapt to survive antibiotic treatments. A group of researchers at Uppsala University have studied how individual bacteria react when exposed to different antibiotics. The result underlines the importance of adhering strictly to antibiotic prescriptions.

How fat takes over the lymph nodes as we age

A new study from researchers at Uppsala University presents novel findings on why human lymph nodes lose their function with age and the consequences for the effectiveness of our immune system. The article has been published in The Journal of Pathology.

Researchers at Uppsala University have shown that Scandinavian wolves carry around 100,000 harmful mutations in their genome. As long as the harmful mutations can be compensated by a healthy genetic variant, this does not need to pose a problem. However, as there has been a high level of inbreeding in the wolf population, the occurrence of double harmful variants has increased with each generation