While there are a growing number of wearable lactate sensors available for sports and fitness, there has not necessarily been an improvement in the understanding of this nascent technology — and the debate continues over the usefulness of monitoring lactate in sweat. A recent article in ACS Sensors , a journal of the American Chemical Society, says that despite a recent history of contradictory — and incomplete — evidence, sports physiology is zeroing in on whether this technology can improve performance while preventing injury.

The article’s co-authors Gaston Crespo and Maria Cuartero, associate and assistant professors at KTH Royal Institute of Technology, say that the promise of lactate sensor technology — being able to determine in real-time whether an athlete is exerting themselves too much or too little —Remains just out of reach for a few basic reasons.

Lactate, or lactic acid, is a byproduct of anaerobic respiration, when muscle cells convert glucose to energy without oxygen. Sampling athlete’s blood helps sports scientists and coaches evaluate an athlete’s conditioning and fitness. But the elusive gold standard would be a sensor that monitors lactate in real-time.

In the researchers’ review of existing research, they point out that there are yet no universally-accepted approaches for sweat collection and analysis which provide reliable data for identifying a correlation between sweat lactate and blood lactate. The article offers an analysis of the current state of electrochemical lactate sensors integrated in wearables, and it lists key features to be improved or changed towards the final success of the technology.

Among these are the researchers’ own technology, which was published in the same journal during July: an epidermal patch containing a lactate biosensor, as well as pH and temperature sensors. The paper was highlighted in ACS Sensors as one of the journal’s most read articles since its publication.

Temperature and pH typically influence electrochemical readings of lactate, resulting in measurements that are far below what one would expect. So the researchers developed a way to isolate the lactate in sweat using a specially-designed polymer layer in the outer part of the sensor. The polymer protects the reactive enzyme in the sensor from responding to anything but lactate, and it enables the sensor to read higher lactate concentrations than electrochemical sensors typically do.

The system’s future is two-fold: commercial and experimental.

Crespo says it is being developed commercially through a new company, IDRO BV, which the researchers founded with a grant from the European Institute of Innovation and Technology (EIT).

Furthermore, a collaboration with researchers at Dalarna University in Sweden is using the technology to conduct on-body tests, in which blood and sweat measurements are being correlated with the sport performance of athletes. In addition, sweat samples are being collected for a laboratory-based validation of the sensor performance.

The KTH researchers are collaborating with Dalarna University in Sweden to conduct full-body tests, in which they aim to answer key questions brought up in their recent paper, such as whether lactate production is dependent on active muscles rather than passive ones. 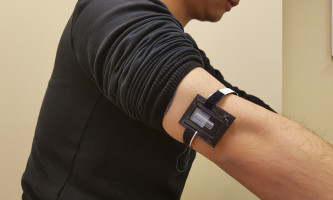