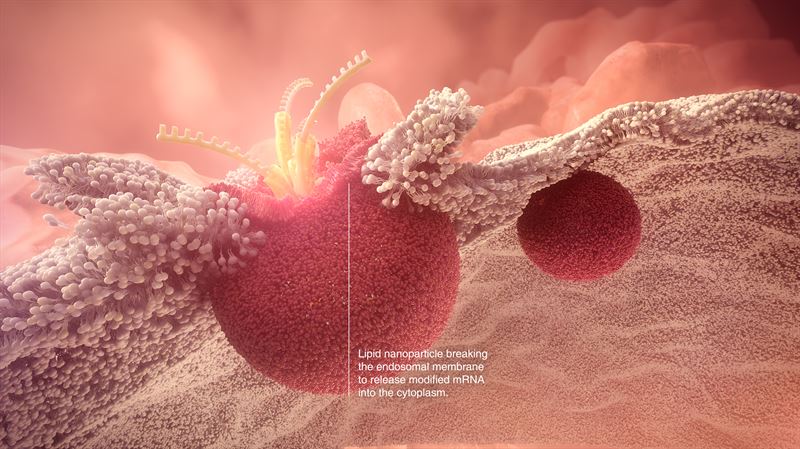 The ease by which mRNA-based drugs are taken up by cells in tissues is crucial to their therapeutic effectiveness. Now, a new detection method developed by researchers at Chalmers University of Technology, Sweden, and AstraZeneca could lead to faster and better development of the small droplets known as lipid nanoparticles, which are the main method used to package mRNA for delivery to the cells.

“We have developed an automated process to monitor and test large numbers of different lipid nanoparticles simultaneously, which we hope will streamline the development of new medicines,” says Michael Munson, Postdoctoral Fellow at AstraZeneca R&D, who is affiliated to the research centre FoRmulaEx, and is the first author of the study that was recently published in the journal Nature Communications Biology.

Messenger RNA, or mRNA, is the code used by cells to produce proteins. When it is introduced as a drug or a vaccine, it is interpreted by the cells as a set of instructions, to then use their own systems to produce the desired proteins.

mRNA-based technologies are being explored for their potential to help treat chronic diseases in various ways, such as by encoding therapeutic proteins, and potentially be tailored for specific tissues, for example to replace incorrect proteins or regulate cellular malfunctions that cause disease.

But there are several major challenges associated with this new technology. First, the cells must be ‘tricked’ into taking in the mRNA molecules. One of the most advanced ways of doing this is to pack the mRNA into a small droplet, known as a lipid nanoparticle. The nanoparticles enter cells in a large bubble called an endosome, which transports its contents to the cell’s ‘lysosomes’, or degradation stations. The lipid nanoparticles containing the mRNA must exit the endosome at just the right moment, to reach the cell’s cytoplasm, where the proteins are made, before the endosome reaches the degradation station. Otherwise, the mRNA will break down and no longer be able to work. This vital step is called ‘endosomal escape’ and timing it correctly is the most decisive factor for mRNA-based medicines to work.

The new study describes a method that the researchers developed to screen lipid nanoparticles for optimization of mRNA delivery. The method makes it possible to monitor the cell uptake, endosomal escape and delivery of mRNA in hundreds of samples at a time. To achieve this, the researchers combined fluorescence reporters to track the movement of the lipid nanoparticles through the cell, for protein expression and the endosomal escape events. The endosomal escape marker consists of a fluorescent variant of the protein Galectin-9 which accumulates at ruptured endosomes and was adapted from work published by a research group at Lund University.

“Instead of just seeing which lipid nanoparticles work best, we can now also understand what makes them work optimally, and use that knowledge to develop and test new improved nanoparticle formulations,” says Michael Munson.

Elin Esbjörner, Associate Professor of Chemical Biology at Chalmers University of Technology and co-author of the study, explains the importance of delivering the mRNA to the target cells as precisely as possible:

“To reduce the risk of side effects, such as the immune system being triggered by the lipid particles, we want to use the lowest possible dose. This is particularly true for diseases which require long term treatment. In those cases, it is vital that the moment of endosomal escape is optimally timed, to allow the mRNA to get out into the cytoplasm with maximum effect,” she says.

In addition to allowing the researchers to evaluate a large number of lipid particles at the same time, the new method can also help examine how efficiently the lipid particles are delivered and how well they function in different types of cells. This could allow for tailoring the drugs to target specific tissues, such as in the lungs or the liver.

“The lipid nanoparticles work differently in different cell types. A formulation that works well for delivery to liver cells, for example, could be significantly different in lung cells. Our new method could help us understand why such differences exist, and to harness this knowledge to design new lipid nanoparticles tailored for different targets in the body,” says Elin Esbjörner.

FoRmulaEx is an industrial research center for functional RNA delivery. The three academic partners are Chalmers University of Technology, the University of Gothenburg and the Karolinska Institutet in Stockholm, carrying out research in close collaboration with AstraZeneca, Vironova, Camarus and Nanolyze. The purpose is to contribute the foundational knowledge required to design safe and effective drug deliveries for the next generation of nucleotide drugs.

In the pursuit of clean and renewable energy, hydrogen plays an important role. But a major challenge facing this transition is that the gas is explosive when mixed with air. For this reason, it is crucial to be able to detect hydrogen leaks as early as possible. Now researchers at Chalmers University of Technology, Vrije […]

With the help of an AI, researchers at Chalmers University of Technology, Sweden, have succeeded in designing synthetic DNA that controls the cells’ protein production.  The technology can contribute to the development and production of vaccines, drugs for severe diseases, as well as alternative food proteins much faster and at significantly lower costs than today. […]

Cancer that splits and develops in new organs around the body becomes significantly more difficult to fight. Now, researchers at Chalmers University of Technology, Sweden, have shown that these metastatic cancers, that spread from the original, adapt their metabolism to the tissue in which they grow. The discovery represents a breakthrough for the understanding of metastatic cancer and is an important piece of the puzzle in the search for more effective treatments.

Copper a clue in the fight against cancer

For cancer cells to grow and spread around the human body, they need proteins that bind copper ions. New research about how cancer-related proteins bind the metal and how they interact with other proteins, opens up potential new drug targets in the fight against cancer. Human cells need small amounts of the metal copper to […]