Compression stockings are popular among runners, but there is no scientific evidence that they actually enhance exercise performance. On the contrary, muscle oxygenation in the stocking wearer’s lower leg during running is reduced. This is shown in a doctoral thesis from University of Gothenburg, Sweden.

“There have been a few studies in the past on the effect of compression stockings, but the results have been contradictory. Our study is the first in which the intramuscular oxygenation and pressure have been measured before, during and after running,” says Sophia Halldin Lindorsson, specialist in orthopedics and PhD at Sahlgrenska Academy, University of Gothenburg, who authored the thesis.

In the study, 20 experienced runners ran 10 kilometers (approx. 6.3 miles) on a treadmill. The test was conducted on two occasions, once with compression stockings and once without. All the runners thus served as their own controls. During the run, a catheter was used to record the intramuscular pressure in the front muscle of the lower leg, and local oxygenation in the muscle was measured by sensors on the skin.

The study also measured myoglobin and creatine kinase, two markers of muscle damage that are measured in the blood.

“We took blood samples both before and after the running sessions and couldn’t see any reduction in muscle damage markers when the runners were wearing compression stockings. This finding, along with the reduced oxygenation in the musculature, supports previous theories that compression stockings have no performance-enhancing effect in healthy people,” Halldin Lindorsson says.

Medical compression stockings are another type and for these, in contrast, there is sound scientific evidence that they help certain patient groups. Increasing pressure in the leg maintains venous blood flow, preventing blood clots and counteracting swelling.

Treatable lower-leg pain suffered by many

The thesis contains three further studies that all address intramuscular pressure in patients with chronic exertional compartment syndrome. The syndrome arises from the pressure in the lower leg muscles rising to an abnormally high level during exercise, which leads to swelling of the muscles, pain, and impaired function. The pain occurs during activity, usually on the front of the lower legs.

“Chronic exertional compartment syndrome is a pain condition that many people probably suffer from without knowing. It’s also often missed when they see the doctor, probably because the pain goes away at rest,” Halldin Lindorsson says.

“I’ve met a lot of patients who have had pain in their lower legs from exertion for as long as they can remember, and thought they had to live with it. But there’s an operation that helps, and my research have shown that the treatment has good results. If more people knew about this diagnosis, a lot of them would avoid unnecessary suffering,” Halldin Lindorsson said.

Runner with compression stockings, and without (photo: Roy Tranberg)

The pressure and oxygen saturation were measured on the front of the lower leg (illustration: Pontus Art Production) 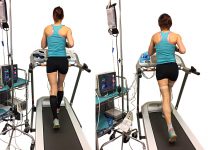