The sea devours large tracts of land when storms wash sand out to sea from the coast. In a new study involving a researcher from the University of Gothenburg has shown that seagrass can reduce cliff erosion by up to 70% thanks to its root mats binding the sand.

Coastal erosion is a global problem that is often combated by replenishing the coast and beaches with new sand in locations where storms wreak the greatest havoc. According to a 2016 survey conducted by the Geological Survey of Sweden, 12 per cent of Skåne’s coastline in southern Sweden is vulnerable to increasing rates of coastal erosion. It is an even bigger issue in other countries. In the Netherlands, the coastline is protected through the construction of dikes made from stone and mud. Another solution is to utilise nature’s own defences against coastal erosion. In this new study, researchers examined the importance of seagrass for preserving the coastline.

“We have seen that seagrass meadows in the coast are valuable assets in mitigating erosion. We already know that their long canopies serve as breakwaters, but now we can show that their root mats also bind together the underwater sand dunes, effectively reinforcing them,” says Eduardo Infantes, a Marine Biologist at the University of Gothenburg and the lead author of the study which has been published in the journal Marine Ecology Progress Series.

More powerful storms in the future

Common eelgrass is a seagrass species that grows along Sweden’s coasts, and there are areas with large seagrass meadows growing on the bottom sediments, such as in Skåne. In other places, the seagrass has disappeared altogether. This not only represents an ecological loss, it can also mean that the coast becomes more vulnerable to erosion. As the climate changes, storms risk becoming more powerful, which in turn can lead to an increase in coastal erosion. Approximately 8% of the world’s population live in areas at an elevation of fewer than 10 metres above sea level. Rising sea levels may see many people affected by coastal erosion.

“This is why it is even more important to preserve those seagrass meadows that still exist today and to replant seagrass in those places where it has disappeared. In our research, we have made successful attempts to restore common eelgrass meadows on the Swedish west coast, but if such replanting efforts are to succeed, there is a need for detailed studies of the current status seabed environment,” says Eduardo Infantes.

In this study, the researchers took samples of sandy sediments with and without common eelgrass from a number of sites and placed them in a large tank capable of simulating waves. The experiments demonstrated that the sand is eroded far less by waves when seagrass is growing in it. The researchers also took samples from muddy seabeds but found that the effect of the seagrass there was less. However, this matters less since muddy seabeds are most commonly found in fjords and other areas that are less exposed to waves.

The next step will be to move out of the laboratory environment and take measurements of sand erosion on an exposed shoreline along the coast. Other factors such as currents, traffic on the water, inflows from rivers etc. can then affect the erosion.

“It’s more complicated in the field, but we have created realistic storm waves in our experiments and the seagrass has clearly shown a protective effect against erosion. I think we will be able to demonstrate the similar effects in field tests,” says Eduardo Infantes. 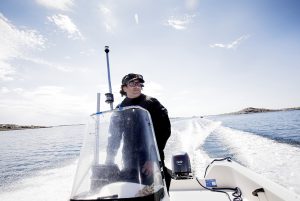 Contact: Eduardo Infantes, Marine Biologist at the Department of Biological and Environmental Sciences at the University of Gothenburg, telephone: +46(0)766-22 95 67, email: eduardo.infantes@bioenv.gu.se

Caption: Seagrass´ root mats can reduce coastal erosion up to 70 %. Researchers at University of Gothenburg have made test in wave tank that shows that the roots makes binds the sand dunes. 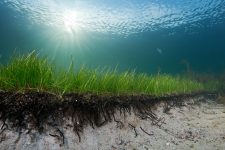