Sounds can help develop speech and gestures in children with autism

Children with autism and other similar conditions often have difficulties in several areas of communication. A new doctoral thesis in linguistics from the University of Gothenburg shows that these children can develop speech, gestures and a sense of rhythm and melody by listening to various speech sounds.

It is well-known that children with autism, Asperger’s syndrome, atypical autism and childhood disintegrative disorder (collectively referred to as autism spectrum condition, ASC) often have problems with gestures and the rhythm and melody of speech, yet studies in these areas remain scarce.

One reason for studying the sound structure of speech is that the development in this domain takes place during early childhood when we learn to distinguish between the different speech sounds and syllables in the speech stream. This is often problematic in children with ASC, since they may find it difficult to sort sensory impressions, to listen and see and experience their bodies simultaneously. In addition, some sensory impressions can be perceived to be particularly strong.

Children with ASC often have a good sense for details, and focusing on practising of sounds and syllables can therefore be used to achieve an interaction and to develop other linguistic areas.

‘We wanted to find out whether an intervention focusing on typical traits of children with ASC could be used to develop various linguistic skills, such as syllables and sentence construction as well as intonation and gestures,’ says Pia Nordgren, author of the thesis.

Nordgren followed two Swedish boys with ASC in three different studies. Minimal word pairs where only one speech sound differs between the words, for example p-b, were gradually introduced in order to increase the awareness of phonemic contrasts and symbolic representations of words. The results point to a temporal relationship between the phonological structure, the melody of speech and gestures. She also shows that auditory and visual perception can be an important precursor for language development in children with ASC. When the children listen and observe, there is a potential for development of interaction via speech and gestures.

The hypothesis behind the thesis is based on theories about the human brain. The idea is that the areas of the brain responsible for the recognition and production of speech are stimulated by the listening and can therefore lead to the development of sound production in general, and also to more advanced syllable constructions and the use of new words. This could also affect the melody of speech, gestures and other areas of the child’s language.

‘It also turned out that the children showed evidence of development in terms of the melody of speech, even though this was not an objective of the intervention. One child also developed his use of gestures, despite the fact that no direct training had been provided in this regard,’ says Nordgren.

The results of the thesis support the notion of a mechanism in the brain (for example mirror neurons) that bridges the perception and production of speech. They also show that speech and gestures interact and that there is a strong relationship between them. Furthermore, it may be that children with ASC are aided by their hand movements in their development of language and speech.

‘Further results indicate that children with ASC with very delayed speech may develop their speech as late as at age five. Thus, the method can be beneficial in interventions involving these kids and can also form a basis for further linguistic studies in the area,’ says Nordgren. 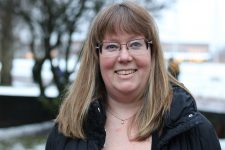