A new research study from Umeå University in Sweden shows that incidents with fatal police violence in the US are 66% more likely to occur in formerly “redlined” areas.

Fatal encounters with police are a leading cause of death among young men in the United States. Jeffrey Mitchell, Postdoctoral Fellow at the Department of Sociology, and Guilherme Chihaya, Research Fellow at Department of Geography, both from Umeå University, Sweden, wanted to investigate how structural racism influence where people are killed during these encounters.

In the 1930’s the Home Owners’ Loan Corporation (HOLC) evaluated 239 US cities and created “residential security maps” to indicate the level of security for real-estate investments. On the maps, areas considered desirable for lending purposes, were outlined in green and known as “Type A”. “Type D” neighborhoods were outlined in red and were considered the most risky for mortgage support. Type D neighborhoods tended to be older districts and were often African-American neighborhoods. This discriminatory practice, also known as “redlining”, withheld services from these neighborhoods. While the practice was officially outlawed by the Fair Housing Act in 1968, the effects of redlining are still evident today in disparities in wealth accumulation, access to resources, and public health across zones that received different classifications.

To understand how structural racism influence fatal police encounters, the researchers used geo-located incidents from the Fatal Encounters Database to study Census tracts that received a classification by the HOLC in the 1930’s. The analysis shows that incidents of fatal encounters with police in formerly redlined areas are 66% more likely than in zones that received an “A” rating.

“We have examined how one of the most famous examples of structural racism, residential redlining, predicts where people are likely to be killed by the police,” says Jeffrey Mitchell. “Our study is the first to establish this link empirically. The systematic differences we see in where people are likely to die during interactions with the police in the US are a combination of both the likelihood of having an encounter with the police, for example by the police targeting their activities in specific neighborhoods, as well as the way that police behave in certain places, for example by perceiving a place as dangerous and therefore being more willing to use lethal force.”

In some formerly redlined areas contemporary conditions have changed over time. For example, through processes of gentrification historically black neighborhoods have become more homogeneously white. The researchers have taken these factors into account and can show that the relationship between HOLC zones and fatal encounters remains even when historical and contemporary racial and socioeconomic compositions are considered.

“There are a couple different reasons why this may be,” Jeffrey Mitchell continues. “The first is that the stigma about a neighborhood remains even though the economic and demographic characteristics have changed. The second is that during processes of gentrification these areas become contested between different groups, and the new (white) population moving in is more likely to call the police. This increases the number of interactions and thus the possibility for fatal encounters. Other research has shown this to be the case in New York, for example, where 911 calls were highest in places where gentrification was occurring.”

Need to think beyond policing

Jeffrey Mitchell remarks that way the redlined areas were labeled are not so different from the “vulnerable areas” recently established by the police in heavily segregated neighborhoods in Sweden. He says that his type of marking may have similar long-term, albeit unintended, consequences.

­“I think too much of the political debate about policing is focused on the actions of “a few bad apples” when there are larger societal forces at work that need to be addressed in order to prevent further violence,” he says. “As our paper show, there are bigger structural factors at work that also influence the likelihood that fatal encounters will occur. Therefore, in addition to some of the reforms proposed by the last three presidents, I think this article points out that we need to think beyond the policing, into undoing some of the historical injustices that are still influencing people lives and making it so people have fewer interactions with the police in the first place.” 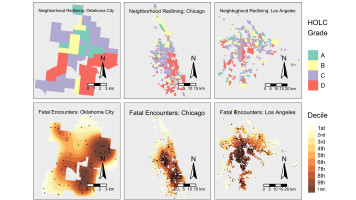