Swedish instrument has landed on the Moon

On January 3, 03:26 Swedish time, the Chinese Chang’E-4 spacecraft landed successfully on the far side of the Moon. The Swedish Institute of Space Physics (IRF) has developed one of the scientific instruments on board. The aim of the instrument is to study how the solar wind interacts with the lunar surface.

It is an historic event as it is the first time a spacecraft is landing on the far side of the Moon. It is also the second time Swedish instrumentation is used on the lunar surface; 50 years ago Hasselblad cameras were used during the Apollo missions.

The Advanced Small Analyzer for Neutrals (ASAN) instrument was developed by the Swedish Institute of Space Physics in Kiruna – in collaboration with the Chinese National Space Science Center (NSSC). The instrument investigates how the solar wind, a flow of charged particles from the Sun, interacts with the lunar surface. ASAN is mounted on the rover of Chang’E-4, which makes it possible to perform measurements at different locations. The measurements could shed light on the processes responsible for the formation of water on the Moon.

“The successful landing means that Sweden is back on the Moon and this is exciting. The next step for ASAN is the instrument commissioning. The first science data are expected before February, 11th”, says Martin Wieser, researcher at the Swedish Institute of Space Physics and principal investigator of ASAN.

Landing on the lunar far side is complex as the landing site is not visible from Earth. To communicate with the lander, the Chinese National Space Agency (CSNA) has previously launched the Queqiao communication relay satellite into a halo orbit about 65 000km further out than the Moon.

Even after the landing there are challenges for Chang’E-4. The rover needs solar power to operate. After sunset, this power source is not available and the temperatures will drop significantly during the two-week-long lunar night.

“The lunar night is especially difficult, but both the rover and our instrument are designed to withstand these extreme conditions. ASAN is mounted inside a thermally insulated payload compartment that is open during daytime and closed during night time to cope with the low temperatures. We keep our fingers crossed that all systems will work as designed”, says Martin Wieser.

The ASAN experiment is a collaboration between the Swedish Institute of Space Physics (IRF) who has developed, built and tested the ASAN ASAN instrument, and the National Space Science Center, Chinese Academy of Sciences (NSSC/CAS) ), who is responsible for the integration of ASAN on the Chang’E-4 rover and for ASAN science operations. 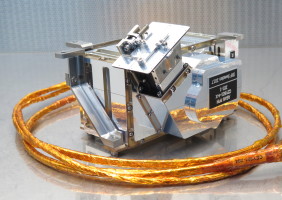