Last Friday, the official inauguration of Universitetskajen could finally take place, after a delay of more than six months. A long awaited and historical day, that offered greetings from Björn Ulvaeus, a soprano in the sky, and a real surprise from Kalmar municipality, worth a total of SEK 300 million.

The day started with an hour’s talk from the temporary stage that had been constructed at Universitetskajen in central Kalmar. Invited guests, with Swedish Television profile Niklas Källner as ciceron, shared memories and visions for the future relating to the construction project that is the largest government investment in Kalmar since the construction of Ölandsbron in 1972.

The initial talk was lined with a series of digital contributions in which Linnaeus University’s reporter on-the-move, together with students and teachers, brought the viewers along on, among other things, navigation in Sydney from the ship simulator, a visit to the art studio, and to have a close look at eyes in the optometry programme’s facilities.

The inauguration ceremony itself started at 13.00, in heavy downpour, when the sopran Pernilla Ingvarsdotter sang O Sole Mio from the top of the watchtower at Kalmar Maritime Academy.

Vice-chancellor Peter Aronsson was the first speaker to take the stage, and he talked about the significance of having the university’s facilities gathered in one location.

“Now that we have gathered all our activities in Kalmar at Universitetskajen, a unique and attractive context for knowledge creation will be created, where it will be close between the disciplines, close between research and education, and close between academia and society. A potential grows here to make more people want to work, study and act in our vicinity – and this is something that we as well as society and the trade and industry need”, says Peter Aronsson.

The vice-chancellor also took the opportunity to present a related event: Linnéuniversitetet LIVE, a series of seminars and events that will establish a new way to meet researchers and students.

The speaker list also included the chair of Kalmar’s municipal board, Johan Persson (S). He has been involved since Agneta Bladh was vice-chancellor at the then Kalmar University College and has been working actively for a gathered university in Kalmar. In his inauguration speech, he presented the next big collaboration between Linnaeus University and Kalmar municipality.

“Here, at Universitetskajen, we will now also establish the most innovative law education in Sweden. It will be built successively and within a few years’ time, students will be able to apply to the programme here in Kalmar. Ten years from now, we are expecting to have 700 law students at Linnaeus University. The work to achieve this will start directly after the turn of the year”, Johan Persson revealed.

Matilda Enkrans (S), Minister for Higher Education and Research, could not take part at the inauguration, but sent a video greeting in which she declared Universitetskajen in Kalmar inaugurated. However, the Minister will get to see Universitetskajen tomorrow, Tuesday, when she visits Kalmar.

Learn more about the inauguration 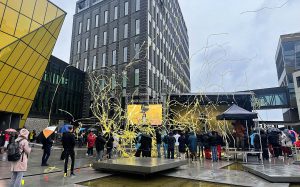 Large-scale cultivation of microalgae can clean emissions from industry, also in Nordic climate

Microalgae can recover greenhouse gases and nutrients from industrial waste. This technology can be used to reduce climate footprint and eutrophication. Lina Mattsson’s dissertation in ecology shows that microalgae can be used also in the Nordic climate, which has previously been considered a challenge as the algae are dependent on heat and sunlight. The technology, […]

In order to improve living conditions in poor countries, mutual collaboration and an understanding for each other’s differences is required. There is a risk that various support projects create a structure for climate transition that does not work in reality once the project funds are finished. This is shown in a new dissertation from Linnaeus […]

Invitation to webinar about Russia’s war in Ukraine and Georgia

From 2008 to 2022 – Russia’s wars in Georgia and Ukraine discussed by a panel of international experts Welcome to join this webinar about the ongoing war in Ukraine, hosted by Linnaeus University, with moderator Natia Gamkrelidze, Ph.D. Candidate in Political Science at Linnaeus University and Fellow at the Davis Center for Russian and Eurasian […]